Since I’m writing about it again it must mean the cake was a success!

The cross between a rich chocolate cake and a velvety smooth cheesecake turned out better than I had planned, but as good as I had hoped. The reason for my skepticism lay not in a lack of faith in my baking abilities, no no, it stemmed from me never having perfected either a chocolate cake before and not even having attempted a cheesecake before!

That’s why in my earlier post I spoke to this ambitious endeavor without going into detail. I decided to throw caution and recipes to the wind and say “you know what, I know what good cake tastes like, let me make this batter to suit.” And that’s what I did.

I also decided that it made no sense skimping on the ingredients and wind up with what would have been marvelous cake had I only used better quality ingredients.

Cadbury Cocoa, Kerrygold butter, Wisconsin cream cheese (yes, there is other cream cheese in the world besides Philadelphia cream cheese), fresh eggs, full cream milk – all went into the cake. As for the frosting, I donned a French accent and used French butter and two types of frosting sugar to create a triumphant cream cheese frosting that melts in your mouth.

I baked a small one for a friend as a late birthday/dangerous anniversary gift (inside joke) and I cut the rest of it into big slices to share. The thing’s going fast though… I may only end up getting one slice for myself!

This year I promised (myself at first, then the world) that I will be doing one cake a month.

The reason for this stems from last year’s late in the game decision to perfect my cake baking skills. Clearly I lack a life. Meanwhile I was baking cakes so frequently and with no set structure – time, occasion etc., it became way too costly and time consuming. Enter the cake of the month.

Some months will have cakes that pay homage to some event that takes place in that month while others will be cakes I just like/feel for that month. January’s cake though – this one is an idea that I must see come to light.

Sin – the Cake. This may be one of the most expensive cakes I will ever make but if you’re going to sin you might as well go all out. The name “Sin – the Cake” (not just sin) is due to the share decadence of the cake. A fusion of cake ideas in one cake. There will be a cheesecake like component, a rich chocolate component and of course a white chocolate component.

I must admit it is an ambitious enterprise especially to start off the year but why wait until December after I’ve allegedly mastered the art of cakes? Pfft! To hell with caution. I’m going to make Sin – the Cake and it will either be a triumph or a complete waste of my money.

If you hear nothing more about this, suffice it to say it was a failure.

Talk to you later!

Right so before I started back blogging I got an iPhone and like countless other “sheeple” the urge to document every mundane aspect of my life overcame me.

All this to say I’m on Instagram and have been for ages now and have become quite the poster! 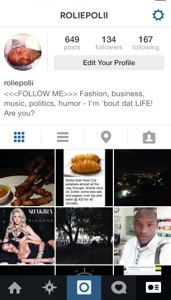 Feel more than free to follow me by Clicking Here!

So I’ve finally installed WordPress on my iPhone, over a year after having it. That means I’ll be more likely to post pics, videos and stories. I just hope I don’t post my “personal photos” accidentally! 😜

Check out the video here!

The purpose of this revised blog is to be more open with readers about what makes me tick, how things in the world work and to help everyone better understand what’s going on in the world around them in a way they can appreciate.

I’ll also be uploading to YouTube so check out my channel – guess what it’s called.

Watch this space to find out more of what’s happening in the life of the Superlative1.

In the most tragic news since the death of Princess Diana of Whales and of the World Trade Center bombings, news reaching the desk of The Superlative1 is that one of the best restaurants in the island, and one of the favourites of all the Superlative1 family has been closed permanently!

It saddens me that the economy has affected fine dining so much that AQUA Restaurant and Lounge has been made the next victim. Also as a result, the next installment of AQUA Del Mar has been canceled, further taking a toll on the nightlife. People need to party in times of recession. It gives people an escape from the pain and troubles of their declining existences. Not to say that ignoring a problem is the solution, but if it’s beyond your control, dwelling and wallowing certainly won’t make a difference.

R.I.P Aqua Barbados, you will be sorely missed.

And the African Americans Strike Again

This is a very shameful story. Well, shameful to a point, as I am not African American as I like to remind my readers. I am not American in general, so I can’t be African American. Apart from that obvious difference would be that of socialization. This abounding fast food culture of the United States is not something that is as prevelant here in the Caribbean as it is there. Popeyes Chicken isn’t even available in Barbados, which is fine by me, I think it’s average at best.

Making things worse are the reactions to the closure, as though a crime against humanity was committed, talking about they were waiting for this day, a special on chicken. MY GOODNESS!

It’s my birthday again people and I’d like to thank all my friends and everyone who made it special, especially the corporate people like
dB Clothing Barbados
Clint Gregory Productions
Taboo Events, Taboo Saturdays and Taboo Tuesdays Mardi Gras Style
The Ministry of Trade, Industry and Commerce,
Scarlet Restaurant and Lounge.

Full list of sponsors to come. Thanks again to everyone, here’s wishing everyone a great day, and I drink to you all.

PS.
Someone sent me this around midnight. 🙂

How to Fry An Egg

Although this person is a Jamaican, I am convinced he is a protege of Barbadian ‘chef’ Peter Edey. For those of you who know who he is, you’ll understand what I mean. Bon Apetite.

So much for the rumours that they’re not dating *anymore*…

Rihanna and Chris Brown were spotted in Barbados fucking the shit out of one another taking in a local fast food restaurant chain. just TODAY! Hmmm I know friends do travel together but this is carrying  a joke too far now. Anyway, if they’re not dating maybe they’re just gal pals good friends. Like the New York Mega Millions lottery commercials go: “Hey, you never know!”

Not being used to such commercial success as his previous album, St. Elsewhere with Danger Mouse, Ceelo, the crooner behind Gnarls Barkley has thought it best to release two music videos sure never to reach even the top 50 of the billboard charts. Any of them.

His video for Who’s Gonna Save My Soul is uber bizarre and the song itself is not that impressive to carry the music video. At some points you don’t even hear the song well enough to know if you can relate to the lyrics. Shame, I actually love Gnarls Barkley and wished them great success, but it seems it would have to come despite their best efforts. Godspeed gentlemen.

I am sure those of you out there who are from Barbados or have visited the South Coast and dined up and down the stretch are familiar with an establishment called ‘the View.’ Famous for… um… Rihanna went partying there one night, that’s it! Anyway, because everything else about the establishment failed to be noteworthy The View closed down and the restaurant was rennovated by some Italian businessmen. Enter Il Forno- genuine Italian restaurant and pizzaria.

For a couple months I had been toying with the idea of venturing to Il Forno and see what it is they have to offer to the hungry patrons of the South Coast and I finally made it there this week.

Reasons for the burning:

The meal came to $48. The guy lost a week’s wage. Something about that doesn’t quite seem fair. Is it his fault that noone else has the codes? At any rate the situation could have been handled differently and it was the perfect ending to an unimpressive lunch.